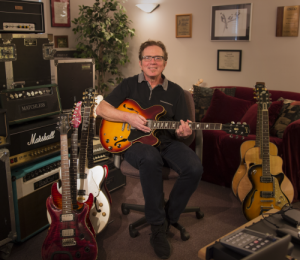 “Mark was born and raised in Japan, the son of Presbyterian missionaries. An early interest in music led to classical guitar lessons in junior high, and eventually tours of Japan with a trio that had a decidedly different sound.

After living in Boston and earning a degree from Berklee College of Music, Mark got married and moved to Nashville in 1982. He promptly was hired as the guitar player and background singer for Amy Grant’s Age to Age tour. After subsequent tours with other artist, and three-year star songwriter positions at both Lorenz Creative Services and Word, Inc., Mark pursued work in the competitive Nashville studio world.

For many years, Mark has played guitar, along with 15 other high-caliber studio players, in Nashville’s premier high-energy R & B / Funk band, “The Smoking Section,” playing the songs of Earth, Wind, & Fire; Tower of Power; Rufus & Chaka Khan; Al Jarreau; and all the funky greats.