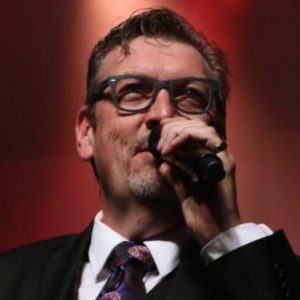 Over Gene : Gene McDonald first began singing when he was still a young child and, surprisingly, sang the high tenor part with family who traveled across the Midwest from 1968 to 1980. When his sister left for college and the family stopped touring together, he joined Jack Campbell and the Ambassadors (also as a tenor). It was in 1982 that his voice changed from high tenor to a booming bass. During his college years at Arkansas State University, he received operatic vocal training. There he also studied under one of the leading choral directors in the nation, Al Skoog.

Gene later attended the Ben Speer School of Music, and went on to sing with The Plainsmen Quartet (1989-1992) and The Florida Boys Quartet (1998-2007). He was invited to his first Homecoming taping in 1994 and has since become a regular in the Homecoming choir. Figuratively and literally, Gene stands tall among a rich legacy of voices comprising the Homecoming bass section throughout the past twenty years.

Gene is also a devoted husband to Teri, and daddy to their precious little boy, Nathan.